York, PA – It’s great to see good people who work hard and provide a positive example for the car community achieve lasting success. We can’t say enough about Cory Sterling and his VagFair car show. We’ve known him for nearly 20 years as one of the true pioneers in the

York, PA – It’s great to see good people who work hard and provide a positive example for the car community achieve lasting success. We can’t say enough about Cory Sterling and his VagFair car show. We’ve known him for nearly 20 years as one of the true pioneers in the VW scene. It’s hard to believe that 10 years has passed since the first VagFair was put on in a little tiny corner of the York Fair grounds. Fast forward to 2016 and The VagFair has been one of the biggest and most laid back events in the scene. While some VW/Audi events have become super corporate, and others have become super elitist – being vocal that they do not want to include the general car community into their event… Cory has embraced the change and growth in the scene. He continues to provide a great weekend for Euro enthusiasts to interact, hang out, buy cool gear from some of the top brands in the industry… and the event is welcome to the non-euro crowd as well, as long as they don’t cause trouble on-site or throughout the town doing typical scene boy things. The show completely engulfs the fairgrounds race track, but the highlight each year are the Madness on the Midway builds. On the Midway, attention-to-detail, insane engine swaps, shaved bays, rare parts, and pure custom fabrication are on display. This year’s winner was no surprise to us – as we picked out Steve’s Corrado – built locally by Legacy Innovations – as the odds on favorite to win this competition all the way back at SEMA 2015. The Wishard bros brought home 2nd and 3rd as well – which was not a huge surprise to us either. We had both of their cars in our eJudged display at the PA Auto Show last year in an effort to showcase some of the top builds in our region. While it took us some time a few years back to convince Cory to make the leap of faith to paperless judging, we’re in full swing now throughout the day and we’re happy to be able to relieve some of the stress that he has on his shoulders throughout the event. And as a nice bonus, we were able to  have our Transit Connect Wagon on display in the JunkStyles x Lowlifestyle booth along with some of our great friends in the scene. We hope to make it up to his Vacationland VagFair event in Maine soon as well. In the meantime, cheers to another job well done and we are glad to see the community embrace this event year after year as one of their all-time favorites. 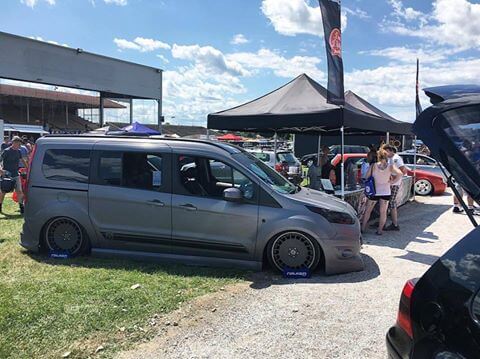